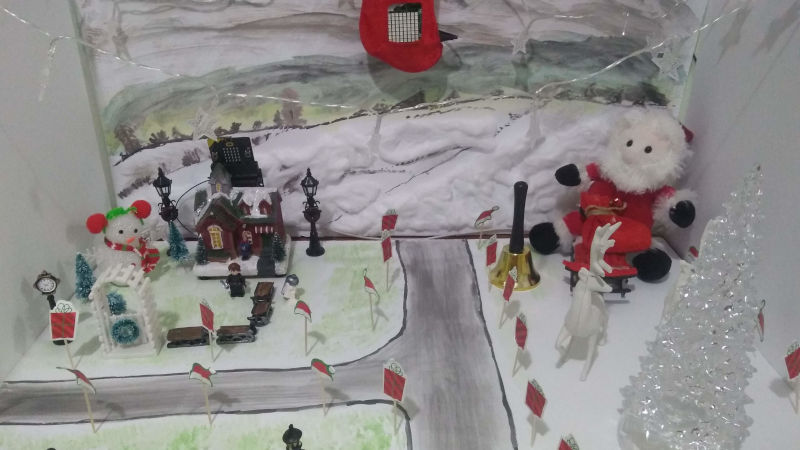 Christmas is a very special time of year for me and my family. Every year, we celebrate the holidays by making a project together and it becomes a memory for me and my wife.

Having moved across the continent, this year’s project is one that is on a budget. I started by procuring items from the dollar store and with a handful of components that I brought with me, my wife, my son and I set out to build a mini Christmas festival. I will be keeping the explanation brief though the discussion can be a lengthy one.

Our project consists of 2 parts which are intended to serve two different purposes. The first part is designed with the Raspberry Pi at the centre and Texas Instruments BLE lights as the end devices along with a sense hat for good measure. Python based web app allows for the control of colours for the budget tree as well as the jolly snowman.

The second part employs two BBC:Micro bits talking to each other wirelessly and are allow for the control of a string of lights and a musical house.

Take a look at the video and then we can walk through the construction.

The Texas Instruments BLE lights can be connected to via a number of methods. I wrote about talking to them via NodeJS over at HackADay making them IoT Lights and wanted to challenge myself to use python instead.

Here is a basic block diagram of the plan.

The Raspberry Pi 3 runs a Python Flask Server that does two things.

Once the web page is loaded, the user can use a coloraturas picker for a particular light. Once the user make a selection, a REST call is trigged and the RGB data is sent to the Flask server. This is translated from text to hex values and passed onto the Bluetooth LE module.

The Bluetooth LE module is also written in python and allows for the scanning and then communication with BLE lights. The UUIDs are made part of the module and hence once the RGB values are passed to it, it scans for BLE light presence. If found, it then updates the BLE light’s characteristics thereby changing the light.

There are a number of components to this and the code is flexible enough to allow future expansion. I also added an animation function that sends varying RGB data to the lights making them change colour in sync with each other.

Both the tree and snowman are dollar store bought outs and I implanted the LED lights to make things work. Neo-Pixel strip are way too expensive for us right now and would also require an external power source. I did get an RGB LED strip from Peter Sir but buying an SMPS, LED driver, PCB etc etc was not in my budget this year.

My son is almost three and he loves to play around with machines and buttons. I wanted to give him the ability to interact with the Christmas project and hence I opted for the wireless control.

One of the Microbits have the pins broken out and I used 2N3904 NPN Transistors as switched to turn ON and OFF two things. First was an LED strip which was procured at the dollar store and the LEDs change colour due to their internal circuitry.

Second, is a small house with a music chip that plays the Christmas carols which was perfect. After hacking it open, I connected the transistor and resistor directly to the contact.

The code sends commands to toggle the GPIOs ON and OFF and the state is saved within the remote itself.

I also employ the LED matrix to display a merry Xmas once the microbit is glued atop the small house.

I could have easily connected the Microbit to the Raspberry Pi by the use of GPIOs.

Model Construction (on a budget)

Water colours can and will bring out the child in everyone and my better half was more than happy to create a model. Cotton for snow and just paint and crayons made this project a family effort. After all its all about bringing everyone together.

Some Christmas toothpicks and ornaments later, we had a small village with Santa Clause, reindeers and a cottage. My son added his collection of Paw Patrol pups and I added a Lego Anakin Skywalker with R2D2. Everyone had a lot of fun

Yes the entire code is up on GitHub and you can download and modify as you like. I am learning better python and hence packaging things was something new.

Head on over to http://github.com/inderpreet/py_e14_holiday_lights_and_music

I am yet to do a setup script though manually installing the modules is quite simple.

The script for the controller BBC Microbit is as follows.

Christmas is all about family and I a feel these projects have become a tradition for us. We did the best we could given the limited resources and budget I have this year and I am hoping my son will be an active participant next year. I ventured into Python for this project and learned about creating a web server as well as implementing a REST API. I also got the chance to put the BBC Microbit in the hands of my son and I am hoping this will escalate.

I hope you had as much fun watching and reading as we had making it. Thanks again and belated happy holidays.