The IoT Boiler Controller is a mash-up of multiple technologies in an effort to demonstrate competency in designing and developing complex applications.

In the April of 2017, RS components and The Breadboard launched a competition on Hackster.io and challenged us to create a project using the Siemens IoT2020. The theme was industrial automation since the IoT2000 is designed for industrial applications and the sky was the limit.

My idea was to explore the capabilities of the IoT2020 in terms of the languages it could be programmed in. Since the target audience for the platform is makers who intend to develop an industrial project, it seemed just that all the maker friendly languages be tested out.

For my case study, I chose to work with the following languages.

I chose the design of an Industrial Boiler since the “Process Control Scenario” is usually a common template for many real world cases. Additionally it allowed me to experiment with a number of communication protocols and add to the complexity of the design. Finally, I added an IoT Dashboard for remote monitoring over the internet using Initial State

Read on for more details on the project.

The block diagram below shows the main components of this project. At the heart of the design in the Siemens IoT2020 which is responsible for communicating and controlling all the peripheral devices. The system is designed like any process control scenario with an actuator which in my case is a Pump controlled via Relay and a process sensor portrayed by the Flow Sensor. An additional temperature sensor allows to extend functionality for safety and cut-off demonstrations. 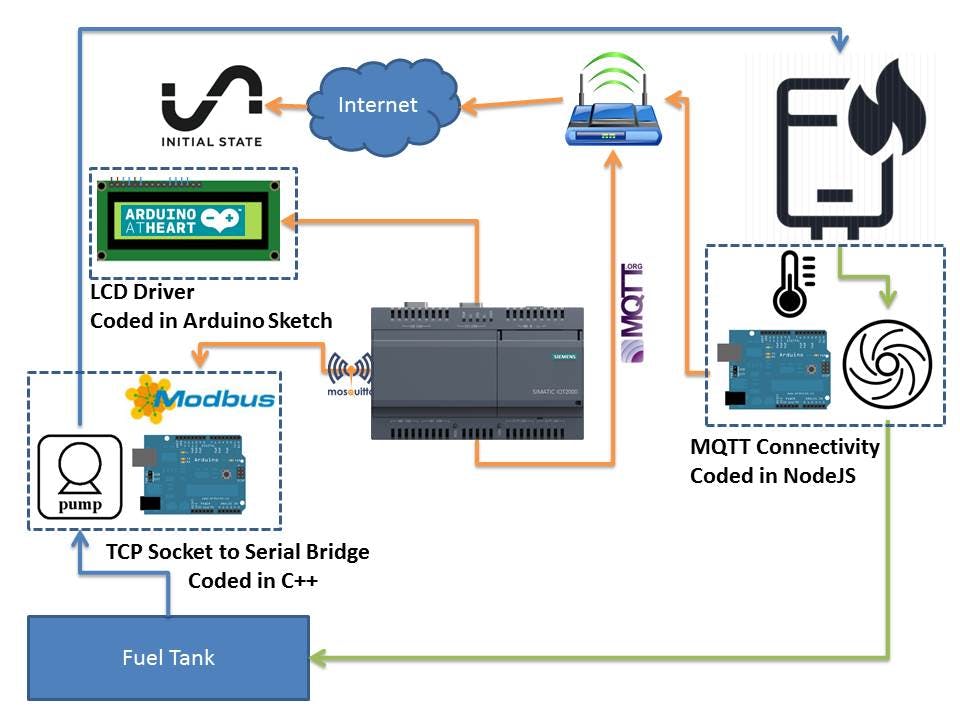 The communication between the gateway and the various components is enabled by protocols such as ModBUS/TLV, MQTT, REST and plain TCP/IP(Sockets).

The system is divided into three sub projects, each with it’s own set of stories. All the stories are summarized at the end in an Agile view of the Project.

The requirement is to design and deploy a ModBUS variant where the edge device is an Arduino Clone that communicates over a ModBUS like protocol and controls the Pump. On the gateway side, a software TCP/IP to ModBUS bridge is to be implemented which can accept socket requests and can relay commands received over this socket connection to the ModBUS/Serial line. The architecture diagram for this sub-project is given below.

The TCP/IP Client and NodeJS application along with the dashboard are a separate iteration hence excluded from this storyboard.

The hardware part works with an Arduino Clone with an FTDI Chip that connects to the USB port of the IoT2020. This serves as proof of concept that serial enumeration comes pre-built and any serial protocol device can be accommodated into a design. Industrial grade USB to ModBUS converters can be deployed into this design without additional effort.

The requirement is to design and deploy a sensor device that can connect via Ethernet and the local network. The communication happens over MQTT which is an existing lightweight protocol that sits atop TCP/IP. This allows for better throughput and scalability and is demonstrated via a flow-rate sensor that transmits rate of fluid flow along with temperature data from a remote location. The architecture diagram for this sub-project is given below.

Arduino comes with an MQTT library implementation that was used. Simple code that translates sensor data into human readable test was added and the values were transmitted via MQTT to a predefined broker.

The hardware consists of an Arduino UNO, Ethernet Shield, LM35 and a Flow Sensor. The data is then received by a Node-RED application that converts the strings into numbers and display it on gauges and graphs. A screenshot of the dashboard is shown below. 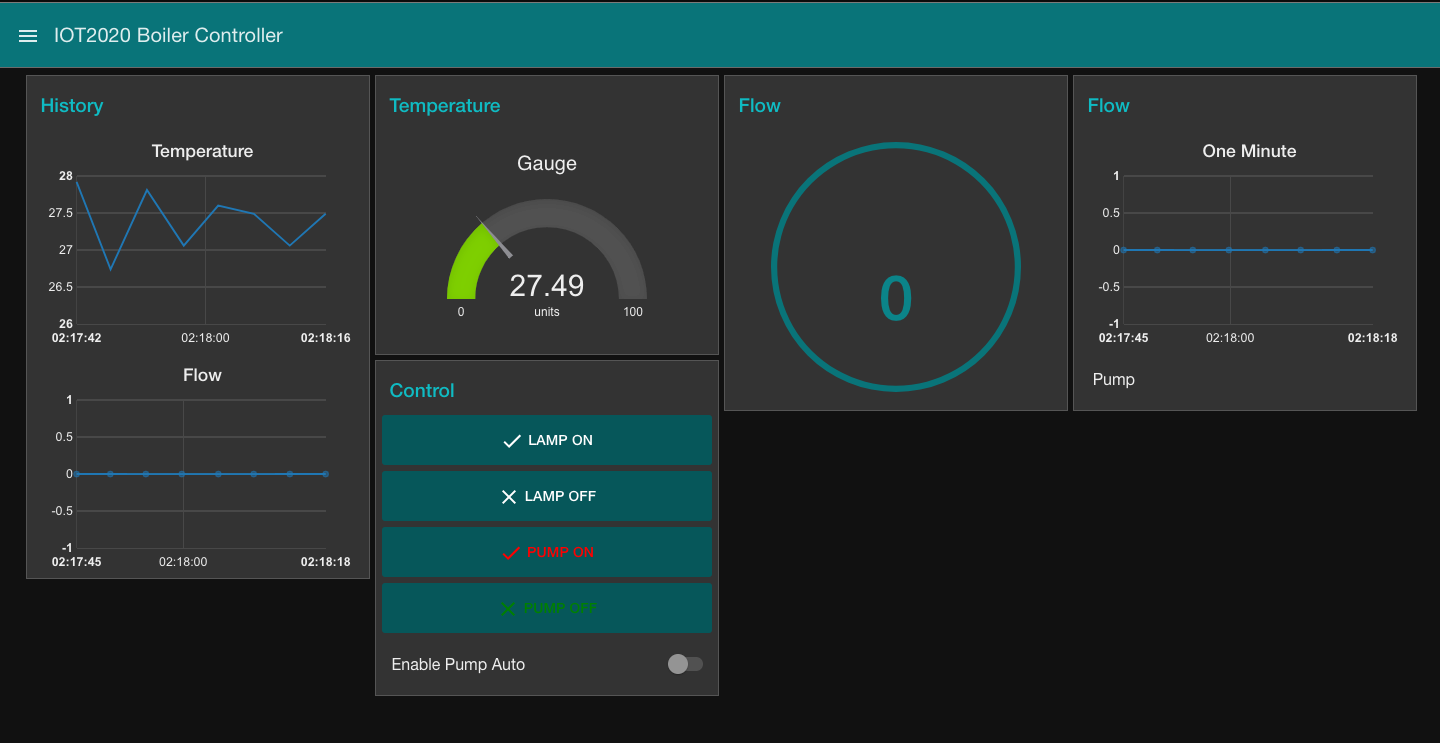 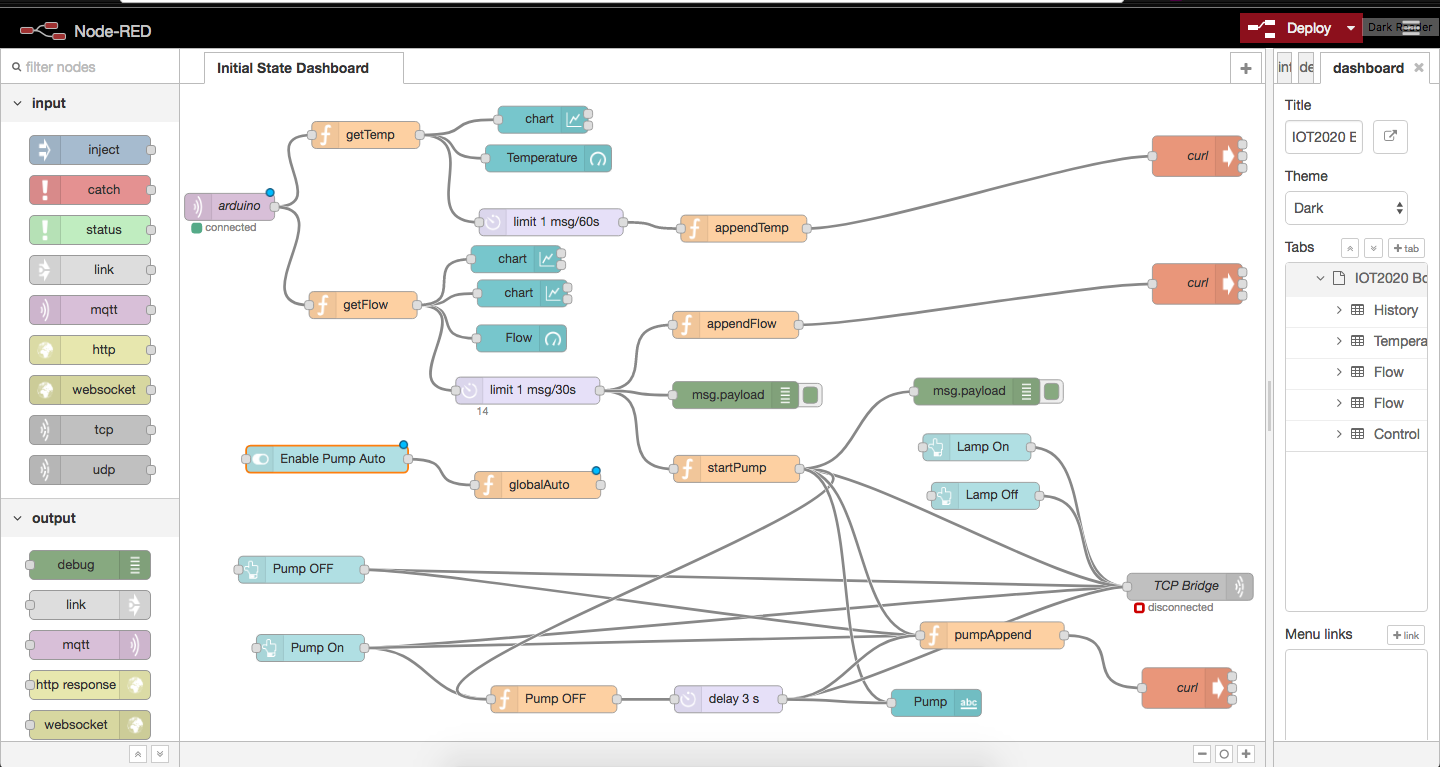 The curl commands at the output nodes are used to parse the data from the system into REST requests which enables the Initial State Dashboard.

This sub-module helps explain the ability of the IoT2020 to be used with the Arduino IDE. I was able to import the LCD driver library from SeeedStudios and use the LCD in this project. It is the simplest part of the entire design and does not need a development cycle. It serves as a case study that any existing Arduino code may be used with minor or no changes as long as the Arduino IDE is used. The user sketch run as a separate process and starts automatically after system boot.

Here is a demo video of the final project with a bit of explanation of the design.

All the code and design files are available for download from the GitHub project repository. I have made sure that the code contains sufficient comments to be reused by anyone and the entire project is distributed under the GPLv2 open source license.

This project is a very essential demonstration of the capabilities of the IoT2020 as a maker platform and its flexibility in terms of coding languages and ease of use. The project was given the second prize in the competition at Hackster and I hope that other can use the information and instructions I have provided.

Special thanks to RS Components and The Breadboard(Peter Oakes) for sponsoring the competition as well as support along the way.